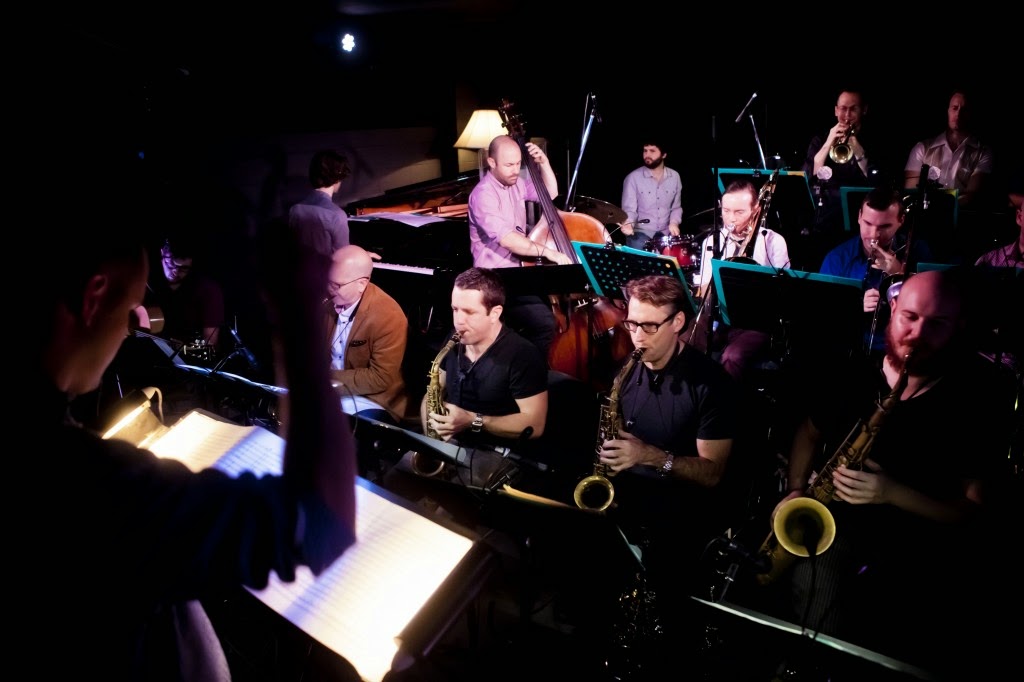 Here's a photo from http://mishphotography.com/ from the EMO Live Album Recording! We had a great time. Many thanks to everyone who came along to get their clapping and cheering onto our new album! We can't wait to get it out into the world - keep an eye out and grab a copy soon!

Posted by emorchestra at 17:48 No comments:

EMO is incredibly excited to be recording our third album over two sensational nights at JMI Live!

After many years of wowing Brisbane jazz fans with their original big band repertoire, the band has amassed over 100 pieces specifically written with EMO in mind. EMO will be recording this journey through Brisbane jazz at what has quickly grown to be the go-to Brisbane venue for original improvised music, JMI Live. Many of the pieces to be recorded were debuted at this very venue, so it seems only fitting to bring them back to their spiritual home to be put down on record. With stalwart Brisbane composers and arrangers such as Andrew Garton, Rafael Karlen, Josh Hatcher and Wade Gregory to be featured, the recording sessions promise to be two great nights of sophisticated yet energetic musicianship.

Night #1,
Wednesday 26th March: STUDENT NIGHT - All Student Card holders who sign up to EMO’s mailing list on the night will receive FREE entry.
All other patrons: $10
EMO: 8-10pm

EMO at the Powerhouse!

EMO's next exciting concert at the Brisbane Powerhouse as part of Jazz Queensland's Hot Jazz Cool Nights festival is coming up on Thursday 14 June at 7pm. Get tickets at www.brisbanepowerhouse.org

The Enthusiastic Musician’s Orchestra features 17 Brisbane jazz musicians playing the original music of the current crop of exciting local jazz composers. The Enthusiastic Musicians Orchestra creates a dynamic vehicle for Brisbane musicians, composers, and arrangers to create new work. With all the bluster and bombast of a classic big band as well as the subtlety and refinement of a modern jazz orchestra EMO draws on an existing library of one hundred and fifty charts forging the band’s status as an artistic big band ensemble driven to swing, and swing hard! EMO is sure to captivate all listeners.

Duration: 1hr 40mins with an interval

The show on 17 April 2012 was EMO's last gig at the Turnaround Jazz Club for a while. Thanks to the Turnaround for having us and all the players and writers involved - we had a great time! Our next gig coming up is at the Brisbane Powerhouse on 14 June 2012. You can get tickets here: http://brisbanepowerhouse.org/events/view/hot-jazz-cool-nights-enthusiastic-musicians-orchestra/

Here's a recording of a new chart for the band from Chris Vale.


The Next Step (arr. Chris Vale) by emorchestra

Posted by emorchestra at 16:41 No comments:

Featuring Bohdan Davison on the alto.